May 28, 2016
My fiancé has a base model Nissan Versa, and she spends a lot of time on the road with it for work. I wanted to give her the gift of hands-free calling too. I am not a fan of the user interface on my own Sony receiver, so I decided to mix it up a little. Here's what I bought:


This car doesn't have a standard barrel-style antenna connector, so you need an adapter. You will notice the antenna adapter cable also has a fun blue wire of ambiguous purpose. It's actually super important - it's used to turn on the car's antenna amplifier. Apparently without it you will get garbage reception.


The other note is that the harness wasn't a perfect pin-match for the cabling. I took out the thicker brown wire on the one side (as it wasn't going to connect to anything in the car) and I moved/re-purposed the useless blue/white wire on the harness (antenna amp trigger - which in this situation is provided by the antenna adapter) to be the ground wire (black wire from the car, which had no wire connected on the harness. I could have just grounded the stereo on the chassis, but I discovered this dashboard has a ton of plastic, and not a lot of reachable chassis connections.

The receiver comes with it's own cable, and you can either choose to snip off the existing connector in the car, or you can buy a car-specific cable harness. I decided I really did not want to jam my hands into the dashboard, stripping and soldering cables in a confined space. I also liked the idea of being able to swap the stock stereo back in later.


It is super easy to access the stereo in the Versa (compared to my Sonata). It's also way easier to find instructions!

Here are some photos I grabbed to verify the wire mapping 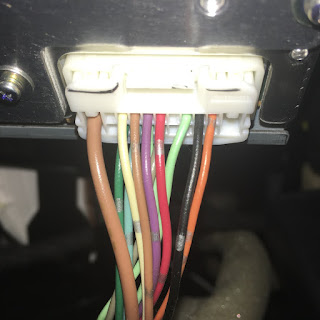 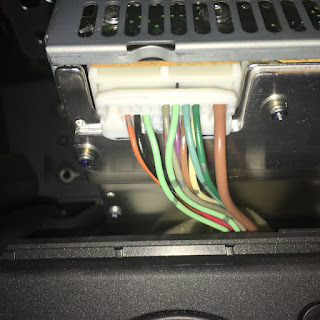 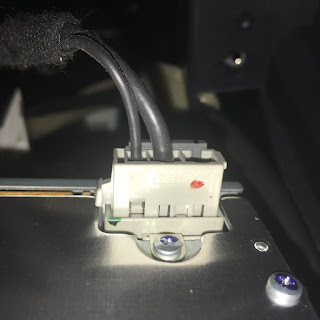 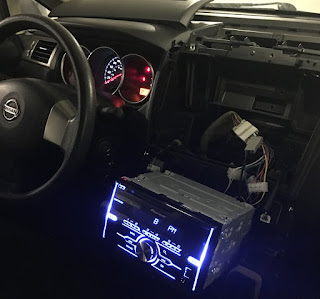 I immediately noticed the sound was phenomenally better with this unit. The stock stereo must not be very good (I noticed a bit of an improvement with my stereo upgrade, but nothing like this).

To test that you have the right speakers wired, you can just start playing the radio, and in the stereo settings play with the fader and balance to force sound to the front/rear and left/right.

Hope this is useful to someone out there!