Why I switched to WIND, and then came right back

April 10, 2016
I had been a content customer of one of the "Big 3" for well over a decade. I was grandfathered in on a $55 month-to-month contract with Fav 10 unlimited calling, unlimited texting, 300 minutes, and 1GB of data. It was enough. As my work responsibilities changed, however, I started feeling aggravated by the extra fees showing up on my bill each month. Conference call went long? Surprise! +$20 on your bill. Supporting a team member in the US over iMessage and suddenly all your messages switch to SMS? Surprise! +$15.

Now, there are a lot of arguments that can be made here, starting with why I don't have a work phone... but that's not what this post is about. I wanted freedom. I wanted to not have to think about who I called or communicated with and how much extra that was costing me. I felt I was paying a fair amount for low-mid range services, and since I had been a loyal paying customer for so long, and hadn't given them lots of pressure for "free" stuff, I should be able to at least switch to unlimited Canada-wide calling and international texts.


The customer loyalty rep actually laughed when they reviewed my profile, saying there was no way they were going to throw in any extras unless I started paying a minimum of $70 per month. I called back a couple of days later, expressed my dissatisfaction with how I was treated, and said I would be switching to WIND. I got "sorry to see you go. Have a nice day". Ouch.

I live in downtown Toronto, and knew several people outside of town using WIND. I figured their service would be the "worst" and took their reviews as positive. I am not a heavy data user, so a slower network didn't worry me. I already used WIND data on my tablet, and always had service where I needed it. I did a lot of reading and came across great articles like this one. I even read the author's own followup about switching back. In short, I thought I knew what I was getting into, and it didn't seem like a bad deal.

I bought an unlocked iPhone 6S Plus, both because I desperately needed an upgrade, and because I thought it would provide the best possible WIND experience. Maybe it did.

The switch was painless.


Customer service was friendly, and upfront about all their charges. I was even offered a discounted SIM card for coming over. I got on the promotional plan for $39/month with unlimited calling and texting, and 5GB of data. I was excited to enter a new chapter of mobile usage. One without limits.

The first week went well. I could carry a call all the way from work in Oakville back to Toronto with no drops. Data was noticeably slower, but it didn't let me down. I had been using my phone mostly outside the Toronto core, and was about to realize how different things are downtown.

Life is full of bumps, and in February my fiancé had some very major surgery at Toronto General Hospital. It was scheduled (as a follow-up to an unscheduled near-death event from the previous year) and another part of the reason I switched to WIND was to be able to use my phone to distract myself a little from all the stress. In the end, all I did was bundle on a ton of frustration.


I had full bars most of the time, but nothing worked. No internet, no calls, no texts 90% of the time. The other 10% of the time I had incredibly poor call quality (people said I sounded like I was underwater, and suffering the vocal consequences of drowning), intermittent texts, and data so slow almost everything timed out. My experience is summarized like this: 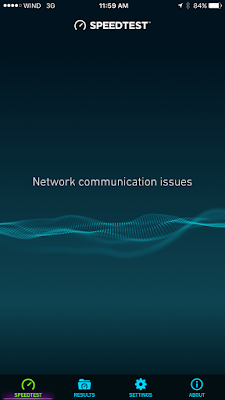 4/5 bars, but no network. I had to press my phone to a specific window in my condo for anything to come though, and to be able to carry out a short grunt-based phone call. On surgery day I was sitting beside a cold window at Toronto General and still couldn't get a damn thing from my phone.

It's pretty upsetting to be unable to update your family on how a loved-one is recovering after a major surgery without leaving the hospital and wandering around in the cold until your phone starts buzzing like crazy with missed messages. Trying to schedule a family pickup and not being able to place the call while you're driving downtown makes you wonder why you're paying for a cell phone at all.

Needless to say, this was not the "slightly reduced performance" I was expecting.

I wanted to give WIND a chance to make it right


I used to work in the mobile world, but it still doesn't take an expert to deduce that it was congestion issues causing my phone to report good reception and provide no service. I called WIND and explained everything. They very kindly gave me a $20 credit for my troubles, and escalated the issue with their network team. I performed all the resets they asked for, even though I had already tried them a hundred times.

I waited the 12-15 business days required for resolution, all while trying to work from home and care for my partner. You really don't know what you've got until it's gone, and when you don't have a landline or a working cell phone, it's amazing how fast you're willing to spend $80/month just to get it back. I think WIND tried to call me to give me an update, but of course, the call failed as soon as I picked up. I called them back from my car, a few blocks away from my building where I knew my phone worked, and got through to their network team.

"You're not the only person experiencing network issues" was all they'd say to me after I refused to accept the vanilla statement of "we looked into it and everything should be working fine now." That's really too bad folks, but it doesn't change my situation. The only other interesting wisp of a notion I got out of them was that the antennas of the Big 3 are pumping out a ton of noise on WIND's spectrum in my neighbourhood. Makes you wonder if it's unintentional.

The next morning I switched back


I went with a promo plan from a secondary carrier operating under one of the Big 3. For $60 a month I get unlimited Canada-wide calling, unlimited international texting (so long as I'm in Canada), and 2GB of data. I couldn't be happier. I feel like I got a new phone all over again. Everything feels faster.


Their business plan is remarkable for Canada: they are showing the country how overpriced the Big 3 are, and have built their own network infrastructure to show they mean business. I don't think they're going anywhere, and if their service improves to the point of actually being usable, I think I'll switch back. If you have coverage outside Toronto and that's where you live and work, by all means consider them. I had perfectly acceptable service in Oakville, Barrie, and Kingston.

This post is in no way trying to solicit or provide advice, nor is it trying promote negative opinions of any carrier. I wrote it with the sole intent of providing useful insight for anyone in my situation, or considering their options. Everyone's experiences are different, and while Canada has a very, very long way to go in terms of providing world-class wireless service and fair pricing, there are a lot of things being done well here.